Paula Clare Harper is an Assistant Professor in the Department of Music and The College at the University of Chicago. She received her PhD in Historical Musicology from Columbia University in 2019, and prior to her appointment at UChicago, she served as an Assistant Professor at the University of Nebraska – Lincoln and as a Postdoctoral Teaching Fellow at Washington University in St. Louis. She teaches courses on American Popular Music, Listening in Digital Culture, and Women in Music Videos.

Paula’s research centers around music and sound and the internet, with focuses on issues of circulation, sharing, sociality and social media, fandom, gender, and representation. Her current book project, Viral Musicking and the Rise of Noisy Platforms, documents the early 21st-century rise of ubiquitous social media platforms through an understanding of them as mechanisms for facilitating virality—a virality that is deeply sonic, and that can be productively analyzed as musicking. From Geocities and Webrings to Twitter and TikTok, the book charts a trajectory in which unpredictable virtual landscapes were tamed into entrenched channels and pathways, through exchanges between the vernacular work of digital actors and the top-down corporate attempts to capture, corral, and control their viral participatory practices.

In addition to her book project, Paula has presented on topics ranging from Beyoncé, to Taylor Swift, to internet musical practices, at conferences across the country and internationally. Her work has been published in the journals Popular Music and Society, Sound Studies, and The Soundtrack, as well as in the Summer 2020 special issue of American Music, for which she was a co-editor.

Recently, Paula co-organized the Taylor Swift Study Day: Eras, Narrative, Digital Music and Media, an interdisciplinary virtual symposium that took place in July 2021; following #SwiftCon, the edited collection Taylor Swift: The Songs, the Star, the Fans is now under contract with Routledge. She was also one of the co-founders of the digital colloquium Music Scholarship at a Distance, a virtual forum for music studies convened in the wake of the COVID-19 crisis.

Equally passionate about her role as an instructor, Paula served as a Teaching Observation Fellow in 2017-2018 through the Columbia Center for Teaching and Learning, and was the proud recipient of the 2016 Meyerson Award for Excellence in Core Teaching.

Beyond campus, the library, and the classroom, Paula sings as a soprano and choral musician. 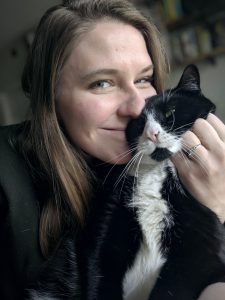 Contact Paula at pch9857@gmail.com or say hi to her on the internet.